After a short hiatus The Lady and I are back and boy have we come back in a big way with the Kaiju! Beer Double IPA another shining example from the growing Australian craft beer scene.

During our time away from The Cocktail Challenge we kind of got a little bit obsessed with the instant restaurant portion of My Kitchen Rules. The show is just so trashy and awkward, but it’s also quite unintentionally funny. We love Pete and Manu’s serious eating faces where they kind of just stare off into the distance while they are eating the contestants dish and then they turn and look each other longingly in the eye. It’s riveting stuff. When you’ve sat through a few weeks of My Kitchen Rules all the buzzwords and sappy stories about food start to blend into one. One of our favourites is the contestants promise of “big, bold flavours”. A close second is “hero of the dish”. I’m pretty sure you would get rather drunk if you played the My Kitchen Rules drinking game where you had to take a shot every time someone said “big, bold flavours” or some other incredibly cliched food saying. It’s ridiculous. Drinking Kaiju! Beer’s Double IPA we couldn’t help but think that if the beer appeared on My Kitchen Rules the contestants and judges would trundle out the “big, bold flavours” claim. Funnily enough, in this case it would actually be a pretty damn accurate claim. 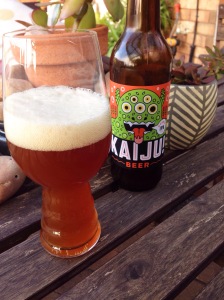 Kaiju! Beer, who used to be called Monster Mash until a certain energy drink company made them stop, have crafted a monster of a beer. The Double IPA clocks in at a ridiculous 9.1% ABV and 140 IBU and comes in a 500ml bottle. It’s big and it’s damn well bold. The Kaiju on the bottle reminds me of some sort of hop monster, which is really fitting for the beer. It’s a fun and eye catching label that really makes a statement on the shelf. The beer itself pours with an attractive and thick creamy white head and the body is a dark cloudy amber colour. Taking the first mouthful the beer really wallops you right in the back of the throat with flavour. You get some malty caramel flavour and a bit of a bready taste. Really though the beer is all about the hops. They are the ‘hero of the dish’ and they’re big, they’re bold, and they’re bitter. Your whole mouth just gets swallowed up in bitterness that really pushed me to the edge of my tolerance for bitter beer. I was sure this wasn’t going to be The Lady’s cup of tea (or pint of beer), but after getting knocked about on that first sip she settled into it like I did. There is a touch of sweetness in the lingering bitterness to just help things tone down a little. It also makes you feel damn warm from the alcohol content. I’ve had a few high strength beers that didn’t feel too heavy and boozy, but the Kaiju! Beer Double IPA is a pretty heavy and boozy beer. 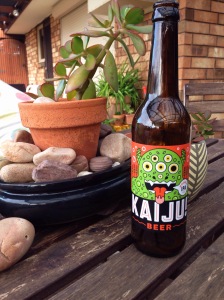 Now it’s time to crack open another Kaiju! Beer Double IPA and experience some of those “big, bold flavours” while laughing at the latest awkwardness of My Kitchen Rules. Don’t forget to take a shot on every cliche.