The Gin Lizz (I just made that up and I’m not if anything actually has that name) is what happens when a) I try to experiment and b) run out of the necessary ingredients to facilitate said experimentation.

In the last post I wondered what would happen if you made a Gin Fizz with lime instead of lemon. I thought I had enough gin leftover to try it, but I was wrong. So, so wrong. I ran out at just over an ounce of gin, which would have been a pretty weak ass cocktail. I had to scramble to think what might go with gin and lime and all I could come up with was Tuaca and Cointreau because they both have citrus flavours as well.

The lesson learned here is always, always prepare before mixing otherwise be prepared to wing it and accept the consequences.

1 and a bit ounces gin (I used South Gin)

Combine gin, Tuaca, Cointreau, lime juice, and sugar in a shaker. Shake vigorously. Pour over ice in a hi-ball glass. 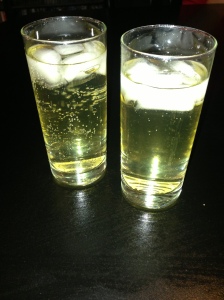 So one thing I can say is the drink ended up with a very nice color, taking on a very light tinge of green from the lime. It also ended up being a sweeter drink and probably needed more of the Cointreau and Tuaca added to let the flavours of those drinks come through as well. It had what I would describe as a smooth flavour though and I think that is the vanilla of the Tuaca coming through. Unlike the Gin Fizz, which hit you with the tang straight away, the Gin Lizz starts off sweet and then leaves the tangy flavour as an aftertaste.

The drink wasn’t a success, but I also wouldn’t say it was a complete failure. I still drank it and enjoyed it, but it probably showed my novice skills at mixing drinks. I’ll probably come back to it later when I’m better prepared and have a better understanding of what flavours combine well together.

For the moment though I’m going to enjoy what’s left of this drink and look forward to the next one.